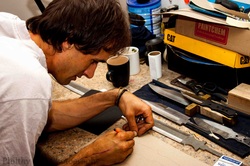 I started making knives at the begining of 2012. It all started with the sad passing of a friends father "Boekoe". Sean and his brother Jaques decided that they would keep "boekoe knives" going, and through this my exposure to knives began. Everyday at work there would be some sort of knife related topic to be spoken about, and a lot of show and tell. then I attended my first knife show, D.E.K.S and was blown away by what I saw, then I got lucky and won the lucky draw, a Bart Fannoy damascus liner lock. It did not take long and soon I found myself drawn into the world of knives. I had no machines, so the googling began. After much research I decided to build my own grinding machines. Then the hard part of learning how to grind knives began, it was a relativly expensive exercise and there was a lot of steel being dumped, and a lot a late nights or should i say "early mornings", but the flame was lit and insparation burned brightly, through much trial and error and endless hours of discussions with Sean, I found my style and have continued to try outdo myself with each new knife.